It flows pretty mightily during the production of Countess Dracula, which runs Thursdays through Sundays until November 2 at the impressive Otherworld Theatre Company, located at 3914 North Clark Street.

Critically acclaimed, Otherworld was founded in June 2012 with the mission of bringing a theatrical experience to the science ﬁction and fantasy genres. 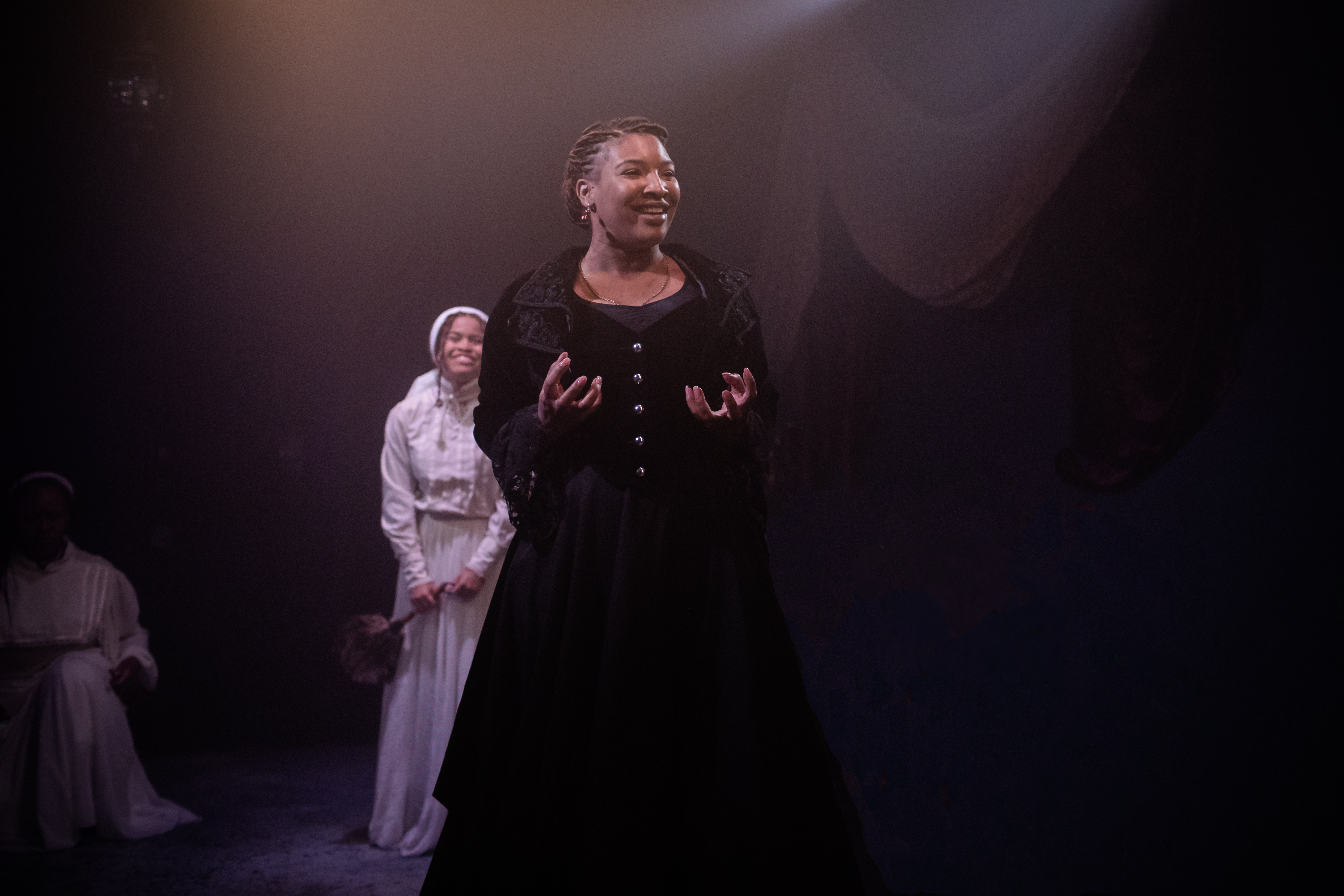 Countess Dracula is a tasty, satisfying morsel sure to meet your most ghoulish Halloween spook-out needs in a two-hour show that just zips by thanks to terrific acting and fantastic production design.

Bram Stoker’s classic Dracula novel has been re-imagined in many ways over countless productions and this one offers a unique take.

The protagonist here is Lady Drac – the script explains her relationship to the Count – and she and her coven exist not in Transylvania, but in New Orleans after the Civil War on their way to New York City. 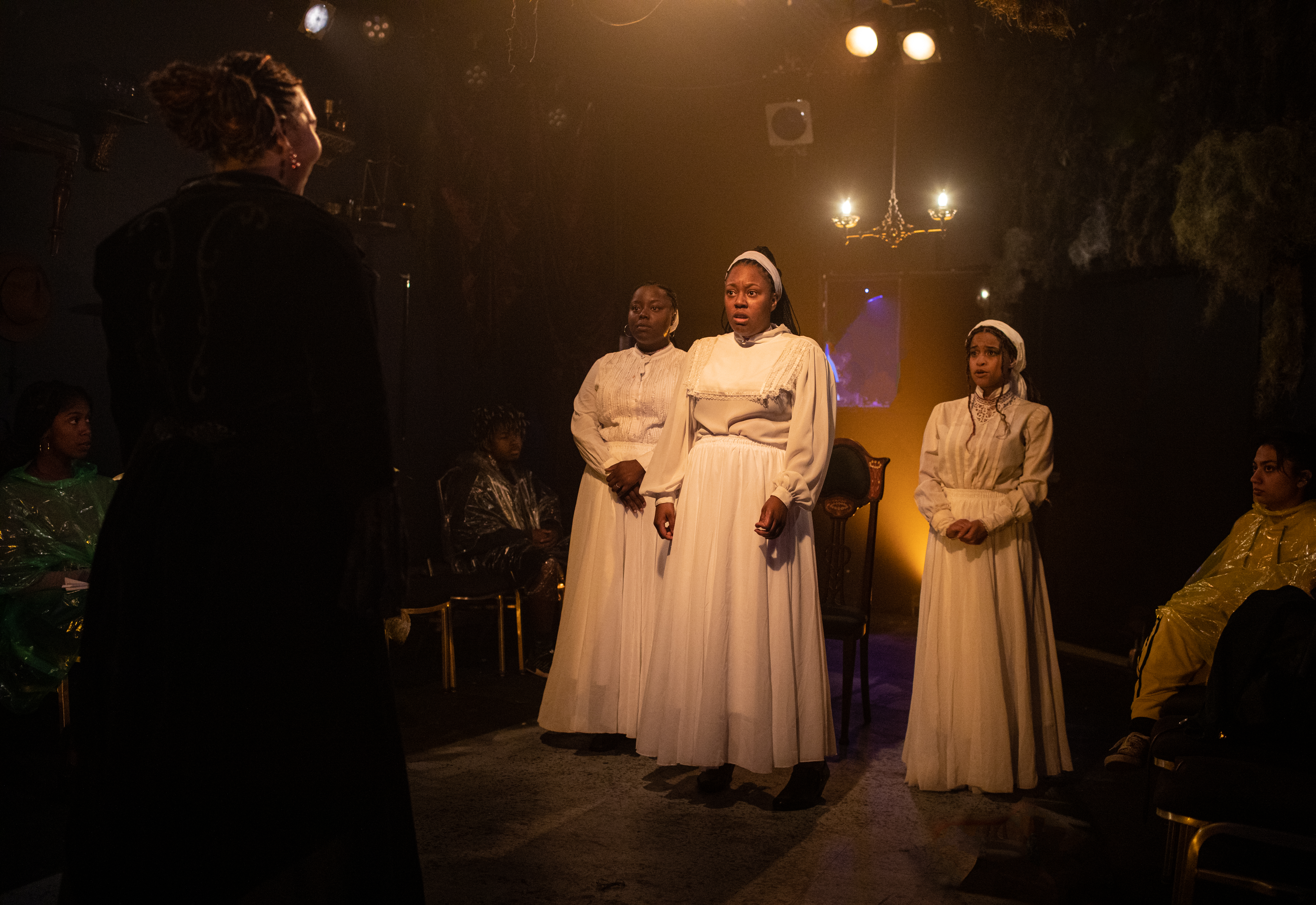 Oh, and she and her clan are Black, which brings up some interesting sideplots and allows for more expansive storytelling. Vampirism in ancient Africa becomes a note of historical interest, for instance.

And one of the vampire brood’s reasons for their trip to New York – outside of having outgrown N’Awlins – is to impede the progress of white real estate developers trying to buy up Black property in Gotham.

Playwright Nick Izzo, who co-adapted the play for the stage along with Am’Ber D. Montgomery, who directs the show, explains:

“Beyond changing the character’s gender and race (speciﬁcally African American), we take it a step further and we make her the hero of this story. A ﬂawed hero to be sure, but a hero nonetheless. She is a kind of avenging angel, protecting the African-American community from their oppressors.

“Countess Dracula is not the evil presence here, she is the means of ﬁghting back. We follow the basic structure of the story (it’s a pretty simple story), but it’s the details that allow us to play with this mythology. We gave ourselves freedom and it very soon became our story. Our Dracula.”

Hard to contradict the playwright, but watching the show, Lady Drac comes across as a menacing, and yes, evil presence, who is no hero even if she isn’t down with some white pricks stealing Black land. She’s more self-centered than avenging angel, especially in matters of the heart – and there are some serious love triangles and he-she/she-she jealousies beating at the core of this story. 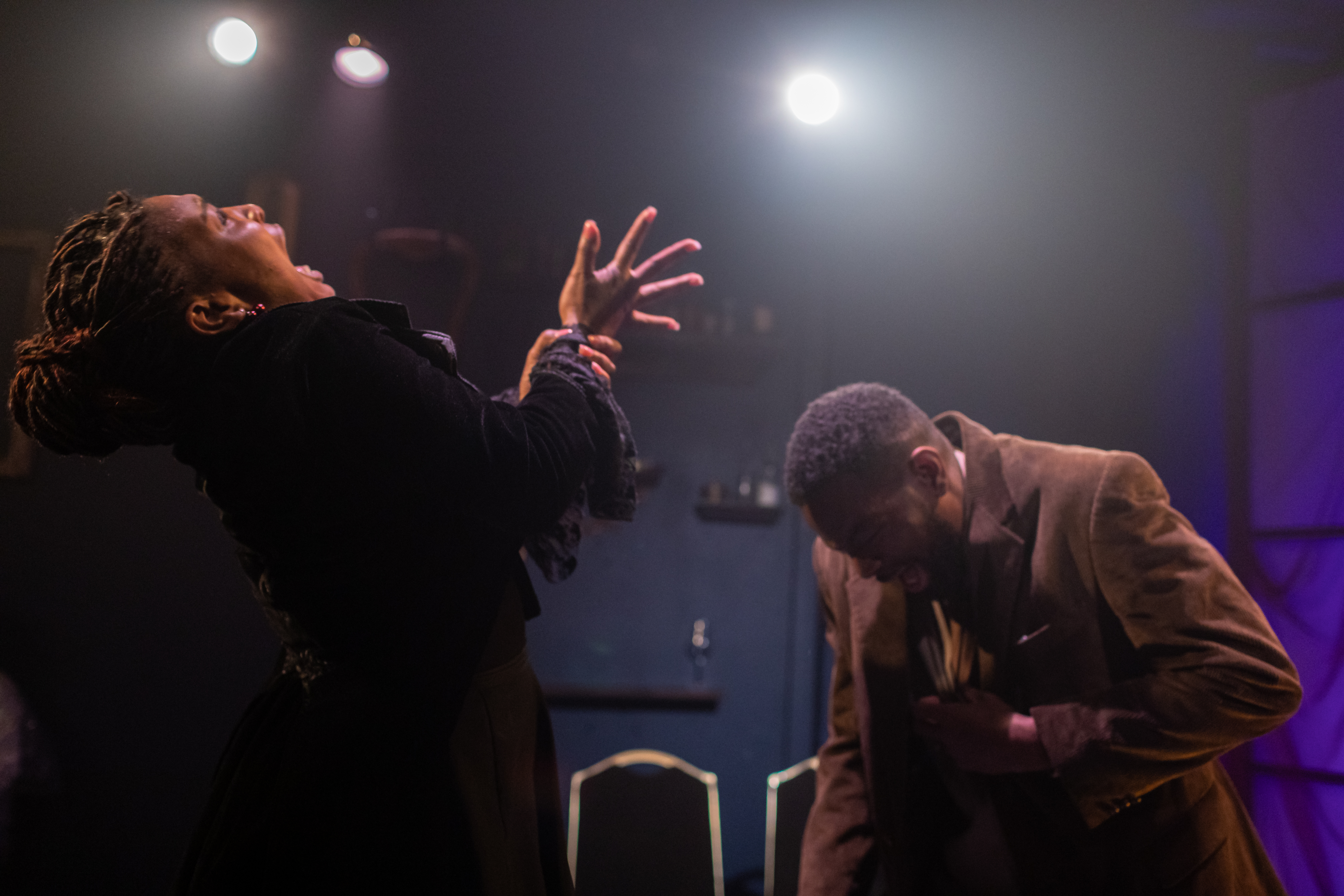 The acting is top notch by all seven cast members – Danyelle Monson, LaRose Washington, Destiny Strothers, Sam Long and Mike Danovich, all of whom play at least three characters; as well as Jesimiel Jaddua, who plays the Renfield-type vampire-controlled human servant who can do Countess Dracula’s bidding in broad daylight.

Robin Menkins is the Countess herself and brings a “Don’t you know who I am; how dare you question me?” authority to her role as Head Vampire In Charge. The fact that most of these actors are barely, barely out of college with acting degrees makes their fully believable and nuanced performances even more impressive.

The delight in being an audience member at Countess Dracula is that you see the acting extremely up close and personal, a few mere inches away in some cases as you are part of the performance space.

There are only 24 audience chairs on the set and the acting takes place in front of you, to the side and behind you. The production design – the lighting, the sound effects, and minimal props – puts you into the play itself.

So you’re enshrouded in the fog on New Orleans streets; you’re there on the ship to New York, in earshot of the grisly fate that befalls the doomed crew. You’re in various rooms of a couple of mansions; and you’re in such close proximity to the blood spraying as the vampires feed that audience members are given ponchos for their protection.

With protective charms and Van Helsing pursuits and stakes through the heart – how can you not love this kind of vibe as All Hallows’ Eve draws nigh? Do yourself a solid and check out Countess Dracula. Bring your compadres and have some goofs and a scary good time!

Free street parking is usually available right in front of the theater.

Tickets for all performances are Pay-What-You-Can, but purchasing tickets in-advance is recommended as seats can ﬁll quickly! The ticketing website is here.