The Justice Department has spoken. We went through the investigation and the reports came back saying that the Chicago Police Department needs help.

Can you imagine being trained for a job today with 35-year-old rules and procedures? It’s antiquated before you even start the job.

I hope the report is not too late, as we watch the federal government administration change from liberal to conservative or worse. This report is too important to play politics with; however, that is probably what will happen.

The mayor sits on a hot seat as he considers his next term. Superintendent Eddie Johnson is up for his job, as well, depending on who the mayor is. Johnson is a street cop and that will serve him well within his ranks. But he is not running from the problem, and I think he will attempt to make the necessary changes.

Almost any Black person in Chicago ­ especially Black men of Chicago streets ­could have reported the same conclusions as the Department of Justice; it just wouldn’t have taken as long.

For some time I have been saying that Chicago crime is out of control. It is amazing that President Barack Obama in eight years in office could not find some kind of solution to the crime in the city that he calls home.

I have said on national TV that Chicago might consider bringing in the National Guard because of our crime and murder rate. But even before I began to say it, Stella Foster, retired columnist from the Chicago Sun-Times said Chicago needed the National Guard.

Foster still writes an online column called Stella in the City and in it, she has offered her critique on Chicago’s crime issues, especially in the Black community. In part, this is what Stella posted on her Facebook page:

I will never understand why Chicago has become the Murder Capital Of The World! Ha, I am kiddin’! You know damn well I am not shocked at all! I have been telling Black folks for years that the murder rate in Chi Town would soon be so out of control that no one will be safe.

I was the first journalist to say the National Guard needs to come here to help out our police. But noooooooo! Liberal Black folks in Chicago thought that bringing in the National Guard would be a mistake and that martial law would work against Black people.

Our people crack me up with that type of talk, especially when Blacks are the ones dying in our streets! I have come to the conclusion that Black people just are okay with other Black folks dying.

We have elite, aristocratic Blacks who have not been touched with violence, yet always want to remind folks that we were enslaved 400 years ago and that systematic racism is why we should not get upset about us killing us because the white man trained us to hate us.

You know Chicago is the murder capital thanks to our people killing each other. It has nothing to do with white cops shooting us. If you think I am wrong, look up the murder stats.

Stop All This Senseless Killing 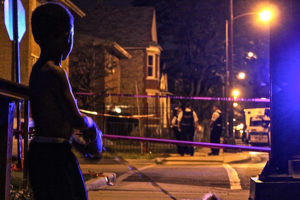 I remember a conversation with a liberal Black person who said that I cannot compare Hispanics to Blacks. I just did not understand why in that individual’s mind there was no comparison. To this very day, I still cannot understand why Blacks and Hispanics are considered different.

We are minorities, no jobs, under paid and living in poverty, so why are we not in the same boat, and why are they not killing each other in these alarming numbers like we are? Why do they appreciate their families more than we do our own?

As long as Black liberals make excuses for why Blacks are killing Blacks, we will remain forever under siege in our neighborhoods. Giving every Black person a job will not stop all this senseless killing.

Please start writing to the powers that be to ask for the National Guard to come to Chicago to help our police, who now are not policing or give a crap about arresting thugs in Black communities because Black Lives Matter are into their own agenda. And if they were truly caring about us, they would get just as pissed off with Blacks killing Blacks as they are about cops shooting a Black person! Get real!

Speaking of jobs, African-American small businesses are closing throughout this city, no thanks to the federal government. Have you noticed that the restaurants in Black communities have Hispanic bus boys instead of Blacks? That is because Hispanics will go into any neighborhood to work and make a living for their families. Our young people think they are too good for those types of jobs.

That is why I say we have to start loving each other, because no matter what, killing is no solution. Love is! Black Power should now stand for the power to love and care about each other again and I do not mean getting young girls pregnant and running off!

If not the National Guard, then the Nation of Islam’s Fruit of Islam soldiers is the answer to the violence for our people, maybe even moreso than the National Guard. Minister Louis Farrakhan and his men can and will bring law and order and faith back into the lives of struggling Black men and women!

Yeah, I’ll say it again ­ the Fruit of Islam men can save our brothers and sisters! Trust and believe! Just think about it: when was the last time you read that one of the Nation’s followers committed a murder in the Black or white community?

Yeah. I said it and I’m Stella in the City!